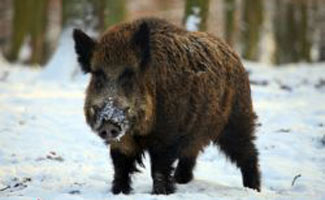 As if wild boars aren’t scary enough, the legend of Hogzilla is enough to have you looking at your bacon in fear. Legends of wild boars grown to enormous proportions have circulated throughout the U.S. for years, with very little proof that such a beast exists. As with any legend, the proportion of the legend and the beast itself seems to be expanded upon daily.

On June 17, 2004, Dr. Eliahu Katz killed an animal while out hunting. The animal was said to be part wild boar and part domestic pig. As hunting and fishing stories usually go, this one was made to be more than it was. The animal was originally said to weigh in at around 1,000 lbs. and to be around 12 ft. long. In the hunting and fishing world, this could translate into anywhere from 400 lbs. and 5 ft. long to the alleged measurement of 1,000 lbs. and 12 ft. long.

Of course, once the idea was conceived, the next logical step was to make a movie out of it. In order for the movie to be as accurate as possible, the great Hogzilla was exhumed. Scientists studied the beast to come up with accurate measurements. What they found wasn’t nearly as extraordinary as the original claim and legend were.

When Hogzilla was exhumed, the remains were studied and found that the wild boar and domestic pig hybrid probably weighed about 800 lbs. and was between almost 7 ft. to about 8 ½ ft long. But that wasn’t the end of the legend of Hogzilla.

Once the legend started, there was no stopping it. Soon, Photoshop and trick photography seemed to be the main tool of those hunting for their own version of Hogzilla. Pictures taken of hanging hogs with men standing in holes next to them seemed to take the Internet by storm. Soon it seemed as if Hogzilla might be found in any field or forest.

Finally, in May of 2007, an 11-year-old boy shot and killed a wild hog near Delta, Alabama that would surpass even the legend of Hogzilla. After trees were removed and a backhoe was brought in, the hog was taken to the Clay County Farmer’ Exchange, where it was weighed in at approximately 1,051 lbs. and measured out at 9’4”. Only a few people actually saw the kill, so even this hog’s weight and length may be exaggerated, but if all of the facts are correct, there is one very proud young man living in Pickensville. For those of you that are stunned about an 11-year-old boy out hunting something that him and a few of his friends could probably ride on all at once, rest assured that the boy was hunting with his father and friends, who had their high-powered rifles trained on the target in case it decided to become more of a legend than it already was.

No national legend would be complete without making its way to the silver screen. Hogzilla is no different. In 2005, the National Geographic Channel aired its feature titled “Hogzilla”. The documentary explored the claims of the existence of Hogzilla as well as those who claimed to have me their own bacon from a personal kill.

Hogzilla even found its way into the world of video games. Cabela’s Dangerous Hunts 2 features a host of wild animals to be killed as the player sits in the role of the hunter who must make specific kills in order to move on to the next level. Hogzilla is featured as the last kill to be made, the “boss” of the video game, if you will. Killing Hogzilla results in successful escape from the area.

Even Snopes has latched on to the idea of Hogzilla though the evidence has left the site with a “mixed” decision as to the validity of the claims of hunters of Hogzilla.

You might wonder why hunters are so fond of killing animals like Hogzilla. Perhaps you’re envisioning a trophy room full of species soon to be extinct. You may not be far off in assuming that any hunter who fired his weapon into an animal like this is sure to mount it on his wall, assuming he can find something strong enough to hold it there with tearing the house down. But, there’s more to the hunt for Hogzilla than filling an empty space in a trophy room.

Domestic pigs are like domestic dogs. They are calmer than their wilder cousins and can be safe to be around, providing you take sensible precautions. A wild boar is a whole other story. Pigs and boars in general will eat just about anything you put in front of them. When it comes to vegetables and fruits, they could wipe out whole crops without breaking a sweat. This isn’t just a problem for farmers, but for the other wildlife in the area as well. Even if you don’t consider the aggression factor, wild boars can alter the environment for other varieties of wildlife based on their vegetation consumption alone. They eat so much that there is nothing left for the other wildlife, which will move on and seek alternate food sources elsewhere.

When it comes to aggression, there is very little room for comparison between domestic pigs and wild boars. Some people even maintain pigs like the potbelly pig, which is bred for the sole purpose of being a pet rather than for its meat production. There is no such possibility with a wild boar.

Imagine a creature shaped like a pig, but covered in hair and sporting razor sharp tusks. Now consider everything you know about how to avoid provoking wild animals and momentarily remove that thought from your mind. Most wild animals will only attack if provoked. That is to say that they would attack in self-defense to protect their young or to protect a food source. In cases where the animal is starved, they may attack to obtain a food source. The wild boar attacks simply for the sake of attacking. If you were to encounter one in the wild and it didn’t try to attack you, it would be a day to count yourself lucky. The nature of the wild boar is one of aggression without reason.

What is to be Expected?

Since Hogzilla has won so much attention over the years and the Internet is always ready for a new legend, you can expect more cases of Hogzilla hunting along with other mysterious creatures. If you’re someone who expects to win their fame by hunting animals of questionable reality, be sure to take accurate measurements and present the animal to multiple witnesses.