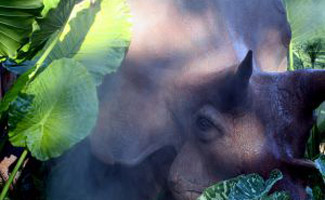 The herbivorous dinosaur well known for the three horns that adorn its skull, the Triceratops roamed our Earth 68 to 65 million years ago. While it may seem near impossible to determine anything about these majestic beasts there are actually quite a few facts which can be obtained about this dinosaur even millions of years later! While paleontologists work to discover as much as they can about this huge prehistoric beast the puzzle of how this horned dinosaur actually lived when it roamed the Earth is slowly coming together piece by piece. From analysis of everything from skulls and horns to predator’s teeth and soil we are coming to know just what the Triceratops really was!

Triceratops: One of the Last Great Dinosaurs

68 to 65 million years ago our earth was nearing the end of the Cretaceous Period and as such the extinction of the dinosaurs was drawing near; however, the late Maastrichtian stage of the Cretaceous period saw the feet of the mighty Triceratops lumber across its plains. The Triceratops, one of the largest ceratopsian dinosaurs was one of the very last dinosaurs to be seen by the Earth before the great extinction in the Cretaceous-Tertiary period and made up the bulk of the plant eating population at that time.

What Family Does Triceratops Belong To?

Triceratops like most dinosaurs are believed to have laid eggs in small clutches in a nest and guarded by the female until they were ready to hatch. During the time that Triceratops roamed the Earth there was a plethora of scavenging dinosaurs and as the end of the dinosaurs drew near this scavenging behavior became more frequent so it was a fairly difficult task to keep a clutch of eggs safe from predators. A hatched Triceratops would soon grow and when fully grown they could reach up to 29 feet long and nearly 10 feet high, with all that height and length you can guarantee that the Triceratops was a hefty beast and that it was, weighing in at around 26,000 lbs!

What is the Triceratops Frill For? Body Armor?

The skull of a fully grown triceratops was on average as long as one third of the dinosaur and was incredibly heavy burdened with the three distinguishing horns and bony frill at the back of the skull. The Triceratops made use of this hefty skull to deter other dinosaurs (including other Triceratops) and predators that either had their eye on the Triceratops as a meal or else intended on preying on their young. The frill of the Triceratops is thought to have been developed for a variety of reasons. The frill has been rumored to have acted as body armor, it has also been rumored to have existed as a visual tactic to deter a predator from the Triceratops head and put focus on to the body instead, and it has been suggested that the frill was used as a part of sexual displays among Triceratops (like modern day deer and their antlers). The last theory in regard to the Triceratops frill is that it plays a role in body temperature regulation.

Triceratops vs. Tyrannosaurus Rex. Who Wins?

It is believed that a Triceratops used its skull to defend itself or young by goring the skin of predators rather than charging them. Triceratops would generally stand their ground to face predators rather than run headlong in to battle. This non-confrontational belief occurs from research performed in current day laboratories where a modeled Triceratops skull was used in a simulated battle with a Tyrannosaurus. Attacking a Tyrannosaurus head on in this experiment resulted in the nasal horn, as well as the beak of the Triceratops, cracking or breaking.

Such results indicate that the Triceratops would gore predators only when necessary and they would do so with their orbital horns rather than their nasal horn to reduce damage to their beak or nasal horn. The beak of a Triceratops was designed for an herbivorous diet of plucking and grasping grass blades and tearing up plant life. The Triceratops beak could not hold up to the rigors of battle and it was relatively easily cracked during battle simulations in modern day labs.

Was Triceratops an Early Flying Dinosaur?

Aside from the beak and horns of the Triceratops another distinguishing characteristic of this dinosaur is its skin. Unlike many other dinosaurs the Triceratops is thought to have had small bristles in its skin. These small bristles show up on imprints of dinosaur skin that is thought to be Triceratops skin, however, no one actually knows the purpose of these bristles at this time. It is the belief of some paleontologists that the bristles may have held quills or hair or even the beginnings of feathers; however, unfortunately for the Triceratops it was far too large to ever fly! One interesting fact that corresponds to the idea that these bristle like structures may have been the beginnings of feathers is that Triceratops belong to the order of bird-hipped dinosaurs. Ornithischian dinosaurs (bird hipped) have pelvises where the pubis points backwards and runs parallel to the ischium.

Where did Triceratops Live? How Fast Did It Move?

Did Triceratops Roam in Packs or Alone?

While the family size and death rituals of the Triceratops may be in question one thing is not in question are the eating habits of this huge beast. The Triceratops used its beak designed specifically for plucking to pull up low vegetation as well as to break down slightly higher vegetation or thin trees and foliage. Often times the Triceratops would use a combination of its sharp beak and sheer bulk to knock down foliage and trees that would otherwise be out of reach. Within its beak tipped mouth the Triceratops could have anywhere from 400 to 800 teeth. The Triceratops was able to hold so many teeth within its jaw due to the fact that the teeth were arranged in columns (also called “batteries”) within the mouth and stacked. A fortunate result of having so many teeth was that throughout its lifetime the Triceratops’ teeth were continuously being replaced.

How Long did Triceratops Live?

Even were scientific evidence to arise that points to the Triceratops being warm blooded the argument would still remain that rhinoceros and Triceratops have so little in common it is laughable. Imagine comparing two animals that lived millions of years apart in terms of lifespan! We dare not even compare human lifespan from century to century due to mitigating factors that influence wellbeing and overall health. Unfortunately for paleontologists information on lifespan and age at death is obtained through skeletal remains and the remains of Triceratops are certainly not plentiful enough to obtain a reasonable sample for dating an average lifespan.

Where Was Triceratops First Discovered?

In 1887 the first bones of a Triceratops were discovered in Denver, Colorado and were sent to Othniel Charles Marsh. Upon first examination of the bones Marsh believed them to belong to a bison; however, at the time he was unaware of the existence of horned dinosaurs. It wasn’t until more Triceratops bones were found in 1888 that Marsh named the beast known as Triceratops. To date a complete Triceratops skeleton has not yet been found and the bones that have been found have been located in Montana, South Dakota, Colorado and Wyoming as well as the Saskatchewan and Alberta.

Has a Complete Triceratops Skeleton Ever Been Found?

No complete Triceratops skeleton has been found to date around 50 Triceratops skulls and many partial skeletons have been discovered. Triceratops remains are generally found in coastal lowland sediments.

When and How Did Triceratops Go Extinct?

The end of the triceratops came with the end of all dinosaurs and while skeletal remains may be few and far between it is assumed that these creatures befell the same fate as their reptilian brethren when according to more recent scientific discoveries, a giant asteroid came crashing to Earth landing in Yucatan, Mexico. For an entire decade following the asteroid impact it is assumed that 90% of life on Earth was destroyed or died as a result of fallout from the asteroid.

The Giant Asteroid That Killed The Dinosaurs

It is claimed that the asteroid that caused the end of dinosaurs was a huge seven and a half miles wide and carried the impact of a billion times that of the Hiroshima atomic explosion. Resulting clouds which formed from the impact of such a huge asteroid caused the sun to be hidden and sulfuric acid rain to come pouring down. There was no hope for any of the land dwelling dinosaur species to survive such a devastating event. How can such a catastrophe be proven? Paleontologists claim that soil samples point to the presence of iridium, an element found in such quantities in meteors. These soil samples point directly to the time frame when land dwelling dinosaurs saw their last days.

I love all dino but ceratopsians are my favorite

I want to be a triceratops when i grow up. I sometimes duct tape stuff to my face so i can be like one.

I have always loved Triceratops. Unlike most dinosaur enthusiasts I prefer herbivores to carnivores. The reason I like Triceratops is because they used an active defense. Unlike Stegosaurs and Ankylosaurs that rely on bony plates and waving the tails around for defense, the Triceratops faces their enemies head-on.

I agree! the triceratops inspired me, now when i see bullies at school i ram my face into them! and i let out this loud scream

It means a three-horned face because tri means three and he has a three horns on his face.

Triceratops has always and will always be my favorite dino! Looks like a battle tank. I know T-rex probably has the majority of fans, but I’m putting my vote with the tricerabad@ss. If I was stuck in the Jurassic jungle I could be this guy and just chill, knowing my armor will fend off most attacks.

The triceratops dino has got to be my favorite dinosaur. Not only does he (or she) look super cool, but when I was a kid my favorite toy was my little triceratops. My older brother had a big Tyrannosaurus, but my triceratops, with its thick body armor and three horns, would always kick butt!