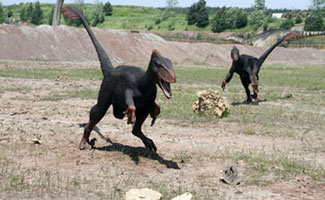 The Velociraptor, also known as simply the “Raptor” roamed the Earth around 75 to 71 million years ago. Contrary to popular belief following the film “Jurassic Park” the Velociraptor did not exist during the Jurassic period – in fact the Velociraptor did not make its first appearance until the late Cretaceous period millions of years later. The Velociraptor was a small dromaeosaurid that stood at about the same size as a turkey and yet it managed to leave a lasting impression both on paleontologists and dinosaur lovers alike!

The Velociraptor: A Feathered, Bipedal Carnivore

The Velociraptor stood at approximately 1.6 feet high and 6.8 feet long and unbeknownst to many this bipedal carnivore actually had feathers. The Velociraptor also had a particularly long tail which was stiff and held out to the back of the dinosaur which was thought to assist in providing balance to the small carnivore when it turned to chase prey. One of the most unique features about the Velociraptor as far as paleontologists are concerned is that of its skull shape.

The most commonly over dramatized feature of the Velociraptor is the large sickle shaped second “toe” on the feet. The Velociraptor has four digits on each of its feet although the second digit is the one which gains all the attention from Velociraptor lovers. If one were to go from dramatic adaptations of the Velociraptor such as the dinosaur found in “Jurassic Park” it would be easy to assume this small carnivore as the size of a tall man and wielding a scythe as a second digit.

Hollywood interpretations of this dinosaur’s lethal digit, however, are overly dramatized and in truth the Velociraptor stood no taller than a turkey and its second digit was around two and a half inches in length. That is not to underestimate the damage that could be inflicted by such a large sharp claw. The two and a half inch digit was indeed sickle shaped and was held above the ground as the small carnivore walked using its third and fourth digits only. The incredibly sharp second digit for which the Velociraptor is most well known was most certainly used to slice open prey, terminate life by puncturing vital organs and perhaps even kill struggling prey by evisceration.

By comparing similar dinosaur features paleontologists are often able to dismiss theories brought about by other paleontologists, this is just one such example. Similar to the algebraic transient property, if the Velociraptor had a curved claw and the Achillobator had a curved claw and the Achillobator found it impossible to climb with said claw, it is of high probability that the Velociraptor would also have had trouble climbing.

Intelligent As An Ostrich

While the Velociraptor did not possess the incredible intelligence of apes of today they did understand how to provide food and did so by teaming in packs to hunt and kill. The idea that Velociraptor hunted and killed in packs comes from the discovery of many Velociraptor remains in one location. Also lending to the theory that the Velociraptor hunted with a pack mentality is the fact that other closely related dinosaurs, like the Deinonychus and Dromeosaurus also hunted as packs.

Due to the size of Velociraptor it is believed by paleontologists that this carnivore fed on smaller herbivorous dinosaurs that it could easily hold down using its sickle-shaped claw. Taking in to consideration, however, that the Velociraptor hunted as a pack animal it is entirely possible that this terrifying hunter made prey of animals much larger than themselves as well.

Velociraptor Preys On Dinosaurs Larger Than Itself

Velociraptor Is A Swift, Agile, And Gifted Hunter

The Velociraptor is believed to have been able to run at speeds of approximately 40mph due to its slender legs, bipedal locomotion and considerably light weight (the Velociraptor weighed in at around fifteen to thirty pounds.) Moving at such fast speeds was useful for hunting prey and made possible by the long stiff tail which provided the dinosaur balance. It is known that the tail of the Velociraptor was particularly stiff due to the presence of ossified tendons underneath the tail as well as bony protrusions on the vertebrae on the top of the tail. These two aspects would make it difficult for the tail to flex extensively. It is believed, however, that there was a slight sideways flexibility to the Velociraptor tail indicating that it was particularly useful in maintaining balance.

As a hunter the Velociraptor was a fast and sneaky thief, which is perhaps why the name Velociraptor translates as “swift thief.” When hunting the Velociraptor pack would isolate one animal from its herd and circle around it. They would then use their sickle-shaped digit to eviscerate or terminate the life of their prey. The Velociraptor also seem to have had enough intelligence to know where to find their prey as paleontologists believe that they lay in wait by streams of water to pounce on smaller animals that came to drink. This theory is backed up by the fact that numerous skeletal remains have been located next to streams of water and the fact that this is a common practice for some predators in the modern world.

The Velociraptor Sees In 3D

Where Did Velociraptor Live?

The Velociraptor is an Asian dinosaur and lived on hot sandy dunes. Velociraptor specimens have been located throughout Russia, China and Mongolia. Unlike some other early discoveries the Velociraptor was not named until 1924 by Henry Osborn, it was discovered in the Gobi Desert in 1922 on an American Museum of Natural History exhibition. The first discovery of the Velociraptor was a crushed skull; however, it was a complete skull and matched a second digit claw which was also found with the skull.

How Many Raptor Fossils Have Been Found? And Where Were They Found?

Was The Velociraptor Warm-Blooded?

Was Velociraptor A Feathered Dinosaur?

The True Nature Of The Velociraptor

Unfortunately for the Velociraptor modern day interpretations of these crafty bipedal carnivores have significantly distorted the original perception of it. While Hollywood has created a much larger Velociraptor with a sickle-shaped digit that rivals a scythe, it has somewhat taken away from the true terror that these pack hunting dinosaurs could really bring. It seems ironic to suggest that a supersized Hollywood version of the Velociraptor could take anything from the smaller, turkey sized, Velociraptor but when comparing the man sized dramatization to the actual turkey sized Velociraptor there is an instant shrinking of fear. There is no doubt that were the Velociraptor roaming the Earth today it would strike fear in to the hearts of even those Hollywood producers but since the Velociraptor is long gone there seems no retribution for diminishing this bipedal carnivores stature, ability to hunt or intelligence. Much as it is offensive to “fluff up a resume,” it is detrimental both to the understanding of such a vicious hunter as well as deterring to amateur paleontologists to learn of the actual size and physiology of the much smaller Velociraptor.

what is their history

Contrary to popular belief following the film ?Jurassic Park? the Velociraptor did not exist during the Jurassic period ? in fact the Velociraptor would strike fear in to the hearts of even those Hollywood producers but since the Velociraptor is long gone there seems no retribution for diminishing this bipedal carnivores stature, ability to hunt or intelligence. Much as it is offensive to ?fluff up a resume,? it is detrimental both to the understanding of such a vicious hunter as well as deterring to amateur paleontologists to learn of the actual size and physiology of the much smaller its first appearance until the late Cretaceous period millions of years later.

I can picture it with feathers – which had two prime functions: warmth and mating displays by males. If they survived today, there would staged VR fights (like cock fights) and people would wear their feathers as ornaments, similar to how Native Americans wore eagle feathers.

Velociraptors did not hunt in a pack. They were the size of a big chicken and some had fur.

The “quill knobs” of Velociraptor, if that is what they really are, are simply spaced too closely together to support large enough flight feathers for it to fly. What then is the adaptive value, if any, of a pair of wings that ties up one’s hands (so they can no longer be used for hunting) but is too small to allow an animal to fly? As every evolutionary biologist knows, or should know, every intermediate stage in the evolution of a feature must be adaptive. What then, is Velociraptor’s wings adapted for if it was a non-avian theropod. Why would a terrestrial theropod that does not have a flying ancestor have
flight feathers and hindlimb wings? What is the adaptive value of these seemingly maladaptive features.

If Velociraptor really did have quill knobs and flight feathers, it would almost certainly be a secondarily flightless bird, not a non-avian theropod. So, we have two likely hypotheses: First a Velociraptor was a secondarily flightless bird and it had feathers and wings. Second, Velociraptor did not have feathers or quill knobs, and it was a dinosaur that was only conversantly similar to the birds. A third hypothesis,
embraced by many people, is the least likely: Velociraptor is a feathered dinosaur with wings, flight feathers, and neither its ancestors nor it has ever flown. Velociraptor (or a similar animal that
lived well before the very first bird that evolved) cannot point to the sky and say, it is god’s plan that I should give rise to flying birds, so I have no choice but to agree with this plan and evolve flight
feathers and wings to prepare for the future.

0
Reply
B
Reply to  Guest

A quick Google search brought up the suggestion that the wings were used for balance and agility.

And if you think about it, turkeys have flight feathers and wings, but they don’t fly. And they’re about the same size as a Raptor.

Ties up their hands? the feathers don’t tie anything up.

And wings on the hindlimbs? Id like to know where you got that information.

I’ve read somewhere that the ancestors of Velociraptors were capable of flight. Or maybe it was some other raptor.

Anyways, I’m sure if you bothered to read any papers or even watched a documentary, you’d actually learn something. And if you had any questions, you wouldn’t be putting out false information, such as hindlimb wings, parading it as fact. It’s okay to think that the Jurassic Park velociraptors are cooler than the real thing, but that doesn’t mean that any evidence to suggest that they weren’t anything like that is false.

Oh, and the dinosaur with hindlimb wings is MICROraptor. Which had four wings. And was likely to be a glider.