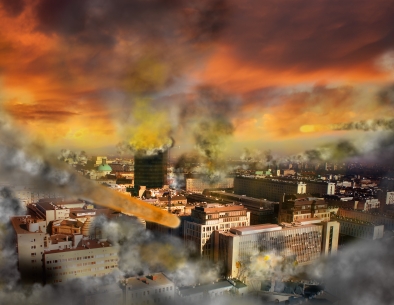 For a while now there have been rumors of the approaching end of the world and all fingers have pointed to the Mayan calendar as a predictor. Well, the date has arrived and, in case you haven’t noticed, the world has not ended. Below we will take a look at why the world didn’t end on December 21, 2012, and what the end of a cycle really means on the Mayan calendar.

To help you navigate this page, we are providing a menu of topics covered on this page:

The Roman calendar that we utilize in everyday life is not too unlike the Mayan calendar. Both systems use cycles to track increments of time but one of the biggest differences between the two is that the Roman day is calculated using base 10 whereas the Mayan “long count” is calculated using base 20. The term “long count” refers to each day that falls within a calendar round which is made up of fifty-two Mayan years. The most recent calendar round on the Mayan calendar began on August 11, 3114 BC and as such that puts the end of the current calendar on December 21, 2012 AD.

You can read more about understanding the Mayan calendar in our article How Does the Mayan Calendar Work?

The End of the Mayan Long Count

After educating oneself in the workings of the Mayan calendar system, it is much easier to see that the “end of the world” date is instead the end of the current fifty-two year cycle. So what does the end of the cycle actually mean? Just as the Roman calendar cycles each year, each decade and each century etc. the Mayan calendar too cycles back around. This means that once the current fifty-two year cycle is up, another cycle will begin and fifty-two Mayan years from now the cycle will begin again. The Mayans did in fact reference to cycles following the current one. The Mayans gave each fifty-two Mayan year cycle an identifying name and it has been proven that cycles following the current “end of the world” cycle have been referenced in Mayan writings.

For those looking for a simple answer, the world didn’t end, because it never was going to end on December 21, 2012. The date that so many have revered as being the “end of the world” is simply the end of a fifty-two year Mayan calendar cycle and the beginning of a new one.

NASA Video Debunking The End of the World Forecast

Bombarded with calls and emails from people concerned with the impending end of the world, NASA has released its official video debunking the end of the world prophecies, and going into detail on what Mayan astrology and the long count calendar really mean.

If the answers have been in front of us all the time, then why did so many people believe that the world would end today? Simply put, people have a tendency to jump to conclusions. With only half of the facts it is easy to misunderstand and misinterpret information and as that information is spread, the mass hysteria begins. The excitement of the approaching end of the world opens up a number of opportunities for people from all walks of life to be someone other than who they are. There are people who are using the end of the world story to come out of their shell and take chances that they may otherwise not have taken. There are people who are also preying on others who sincerely believe that the end of the world is coming. Hopefully, the fact that the end of the world did not happen is enough to stop these behaviors. The truth is though, that even though the world didn’t end today, there will be plenty of people who find a reason to believe that it will happen in the near future.

A History of Failed End of the World Prophecies

Why Are We So Fascinated with the End of the World?

There are many theories as to why people are so fascinated with the end of the world.

Confirmation of a Higher Power

For some groups of people, particularly those who subscribe to “cult” beliefs or religious extremists, the idea of the end of the world is confirmation that there is a higher power. This concept can be seen in a number of previous “end of the world” events that failed to come to fruition including: the January 1, 2000 Ugandan group suicide, the April 6, 2000 second coming of Christ, November 29, 2003 end of the world prediction by Nancy Lieder, Harold Camping’s various predictions and Ronald Weinland’s multiple predictions. All of these people, or groups of people, believed that their religions predicted the end of the world. While their predictions did not come to be, the very act of having others believe in them gives these individuals and groups confirmation that their belief in a higher power is not for naught.

A Position of Authority

For some cult leaders there is a long sought after satisfaction that comes from being in a position of authority. Being able to convince others of this authority – often citing that they are the “chosen one” brings a feeling of absolute power. This feeling is cemented when they are able to get others to subscribe to a fabricated belief. This power and authority can often result in financially draining followers or even mass suicide.

Misinterpretation of the Facts

As is the case with the end of the world prophecy that failed to come to be on December 21, 2012, sometimes these ideas are merely a misunderstanding or misinterpretation of facts. While certainly someone may have intentionally cherry picked what they chose to believe about the Mayan calendar, many others simply believed what they were told which was based on a misinterpretation of facts.

A Sense of Community and Togetherness

Perhaps one of the hardest subscriptions to an end of the world theory to understand is the idea of wanting a sense of community or togetherness. There are many things that can bring a group of people together yet for some it takes cult life to satiate that need. Those end of the world believers who subscribe to this type of theory are most often cult followers. These individuals are most likely to commit mass suicide upon arrival of their “end of the world” date as a desire to be a part of their cult family.

Pop culture gets blamed for a good deal in today’s society but in some cases there is some validity behind this concept. For some people the need to believe what they see on television, in movies or read in books and in publications (both fiction and non-fiction) is too strong. For these people a misinterpretation of facts often also comes in to play and they hear or read something and misunderstand it as being fact. The truth is however, that Pop culture shouldn’t get the blame, rather, individuals who are unable to distinguish fantasy from reality and those who are unable to expand upon ideas they have been exposed to should shoulder this burden.

Will the End of the World Ever Come?

After multiple failed end of the world prophecies some people are left skeptical that the end of the world will ever come at all. While our future is undoubtedly filled with many more incredulous predictions for the arrival of the “apocalypse” there are, however, a small number of predictions that may hold merit. These predictions are slated for so far in the future though that they should be of no concern to those living today.

A few of the current end of the world prophecies that may hold water are listed below:

There is No Reason to Panic

We have been forgiven. Now it’s live each day as if it’s our last.

whoever thinks the world isn’t going to end right at that moment is naive. It will destruct itself.

All I have to say is thank God for another day of life that we all take for granted… It is said in the Bible that no one knows the date, hour or year, let alone Jesus didn’t know or the angels.

Looks like just another disappointment for people so desperate to see things change. I think we want to believe so badly that some catastrophic event will come along and change our world into one worth living in that we are easy targets for those “predictions.”

I am no exception; I want so much to see the hate and discontent on this planet abolished that I too believed the 2012 prediction. It was like waiting for Christmas. But, it never came and I think the reasonable part of me knew it wouldn’t.

The archeologists and other scientists that started this “rumor” should have some interesting comments to make regarding the fact that 2012 didn’t happen, and, the world is still just as negative and hateful as it ever was.

Joanne, the rumors of the end of the world rarely come from archeologists and scientists so they owe no one an apology or explanation. The rumors in this case started form people who don’t have all the facts but still draw faulty conclusions anyway. Ironically enough, if you had read the entire article you would have understood that instead of blaming the wrong people.

And you put yourself in the group of people who were disappointed that it didn’t happen.