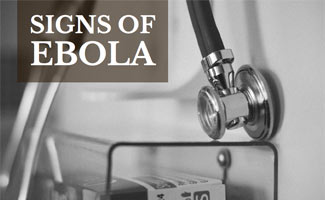 The Ebola virus kills about 50% of people who contract the disease. Depending on the outbreak, fatality rates can vary from 25% to 90%. These aren’t numbers you want to take chances with—especially considering survival is greatly based on how hard your antibodies fight for you.

Ebola is a rare and life-threatening disease caused by an infection with a species of the virus. There are five Ebola virus species:

The Ebola virus host is still unknown. It is believed to be animal-borne, though, and even more specific, bats. Four of the five listed virus strains above occur in an animal native to Africa.

Ebola virus symptoms can appear anywhere from 2 to 21 days after exposure (the average is 8-10 days). Below is a list of symptoms.

Ebola transmission is still largely an unknown, but it is believed that the first patient comes in contact with an infected animal, typically a primate or fruit bat. Then, person-to-person transmission begins and larger numbers of people are affected.

For person-to-person transmission, the virus is spread by broken skin or mucous membranes (e.g. from the eyes, nose or mouth). This can occur through blood, body fluids and objects (needles, syringes, etc.).

Ebola is NOT spread through the air, by food or by water. However, the virus can be spread in Africa by handling bushmeat (aka wild animals hunted for food). There are no signs that mosquitoes or other insects spread the Ebola virus. It only infects humans, bats, apes, and monkeys.

Male Ebola survivors can have traces of the virus in their semen. Ebola could be spread through contact with semen. The amount of time Ebola can be found in semen is unknown and can vary from man to man. According to study results, the virus decreases over time and leaves the semen eventually. At this time, it is unknown if Ebola can be spread through the contact of vaginal fluids from a woman who has had Ebola. To be safe, avoid contact with semen and vaginal fluid from anyone who has had Ebola.

There is no FDA-approved Ebola vaccine. There are ways to treat Ebola symptoms and if used early, they can significantly increase the chances of survival. These treatments include:

There are Ebola treatment experiments being conducted but they haven’t been approved or fully tested yet. The cure for Ebola comes down to good, supportive care and a patient’s immune response. People who survive Ebola develop antibodies that last at least 10 years. Some survivors of Ebola have developed long-term complications including joint and vision problems.

The virus was first discovered in 1976 near the Ebola River in (what is now) the Democratic Republic of the Congo. Since then, Africa has had sporadic outbreaks.

Since March 2014, numerous countries in West Africa have been experiencing the largest outbreak of Ebola. In an attempt to stop the outbreak, the Centers for Disease Control and Prevention (CDC) activated its Emergency Operations Center, which coordinates assistance with U.S. government agencies, the World Health Organization and other domestic and international partners. Teams of health experts were sent to West Africa to help as well. The transmission of Ebola in West Africa has now been controlled, however, there are still cases popping up every now and then. The countries affected are now able to identify and reduce transmission due to the experience and tools they now have.

The video below shows a good overview of Ebola.

To avoid Ebola you must avoid contact with the virus, which means avoiding areas where there are known outbreaks and people who have contracted the disease. Be sure to wash your hands frequently and avoid bushmeat. Follow any infection control procedures and do not handle the remains of people who died from Ebola.

Do you know someone who has had Ebola?

I’ve had a terrible fever the past couple days, started Googling what it could be and now I’m paranoid it’s Ebola. Maybe I should just stop trying to diagnose myself and go to a doctor instead.