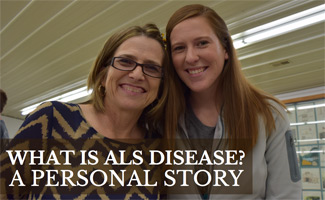 My mother was diagnosed with ALS in March 2016. To be blunt, when she told me about her diagnosis, I felt a type of heartache I’ve never felt before. The crying wouldn’t stop, my eyes burned from all the tears and my head was consumed with the worst headache ever.

My body was exhausted from mourning my mother who was still alive. The idea that she wouldn’t be around for as long as I wanted her to was terrifying to me. But, my fears prompted me to learn more.

ALS stands for Amyotrophic Lateral Sclerosis and is also known as Lou Gehrig’s disease. It is a progressive neurodegenerative disease that affects nerve cells in the brain and spinal cord. ALS patients’ muscles are not getting the nourishment they need, so they are deteriorating and scarring/hardening.

Their motor neurons that go from their brain to their spinal cord and from their spinal cord to their muscles are dying, making their brains unable to aide with muscle movement. It is an incurable disease that causes muscle weakness, paralysis and eventually, respiratory failure. Patients who are diagnosed with ALS are typically told they have 2-5 years to live.

There are two forms of ALS: sporadic and familial. Sporadic ALS consists of 90-95% of ALS cases. These cases are not genetic and are considered to be “random” in that they can affect anyone, anywhere.

Familial ALS (FALS) is a genetic form of ALS which accounts for 5-10% of ALS cases. FALS is inherited and for each offspring there is a 50% chance that they will inherit the disease.

There is no known cause of ALS but researches are studying possible causes which include:

The average age of people diagnosed with ALS is between 40 and 70 with the most common being 55 years old. However, there are cases of people being diagnosed younger. This is why the diagnoses of ALS can sometimes take years. Most people think it’s just “old age” catching up with them so they don’t go to the doctor.

ALS is also difficult to diagnose early because it presents itself similar to several other neurological diseases. There are tests that can be conducted to rule out other conditions.

Early signs and symptoms of ALS may include:

ALS does not affect bowel/bladder control, senses or ability to think.

Sadly, once ALS presents itself it almost always progresses. The timeline and stages of ALS can vary for each person. The average person lives 3 years, 20% of people live 5 years, 10% live 10 years and 5% live 20 years or more with ALS.

ALS often begins in the hands, feet or limbs and then spreads to other areas of the body. People may notice they are dropping things more often or they’re unable to walk as far as they used to. Stairs may become difficult to walk up. People with ALS may need more frequent breaks than they used to. These are among the early signs of ALS. For many people, it takes a year after ALS has presented itself for them to be diagnosed with ALS.

ALS eventually progresses to other areas of the body. There is no linear path and sometimes ALS can be at a standstill for weeks to months at a time, with no change in function. There are even rare examples where people have regained lost functions. These are typically transient though and less than 1% of ALS patients have significant improvement lasting 12 months or more.

As the disease progresses the muscles and body become weaker. Over the course of the disease the weakness affects chewing, swallowing, speaking and breathing. Some people choose to be put on feeding tubes and ventilators to help get more nutrients to the body and to assist with breathing.

Unfortunately, there is no ALS cure and there are very few ALS treatments. The treatments that are known are meant to slow the progression of symptoms and/or make the person more comfortable, not to cure the disease.

One of the only FDA approved treatments known to slow the progression of ALS is Riluzole. Riluzole was approved by the FDA in 1995, and has been proven to increase a person’s lifespan by a few months. The drug slows the disease’s progression for some during the more advanced stages of ALS.

Medications prescribed for the following symptoms can help make a person suffering from ALS more comfortable:

In May 2017, the FDA approved a new drug called Radicava. Radicava, also known as edaravone, has shown a decline in ALS sufferers’ level of daily functioning. For some, it slowed the decline of function by 33%. We hope to have more on this drug in the future to share with you. In the mean time, we hope this is the right step toward a cure for ALS.

There are also various therapy and support professionals who can help ALS patients adjust to life with ALS:

Despite the viral “Ice Bucket Challenge” that swept the web in recent years, ALS is not a disease many people know much about or understand. About 5,000 people in the U.S. are diagnosed with ALS every year and it is estimated that around 20,000 people are living with ALS in the U.S. at any given time.

Very few people have this disease yet many die just a couple of years after diagnoses. There are ways you can help by spreading the word about ALS. Share this article or donate to one of the charities we’ve listed below.

If you’re looking to donate to help with researching a cure for ALS, we suggest ALS Therapy Development Institute (TDI). It is the world’s largest non-profit biotech organization focused 100% on ALS research.

My family has started a donations page through ALS TDI  where we’d love for you to donate if you can. 87 cents of every dollar donated goes towards ALS research.

The ALS Association is also a great organization to donate to help with ALS research, public education, patient and community service, administration and fundraising. The ALS Association has been a huge benefit for our family in regards to patient services. Medical supplies can be expensive and the ALS Association allows patients to use equipment and then return it when they are finished.

Mom borrowed a shower chair, cane, ramp and many other items through the ALS Association. They also offer other support opportunities including group meetings and educational resources for families who have a loved one who has been diagnosed with ALS.

Since movies are a way for many of us to learn, we wanted to suggest this movie to you. You’re Not You is a movie about a woman who is diagnosed with ALS and how it affects her and those around her. It gives you an inside look at this incurable disease. Here’s the trailer for you to preview.

My Mother’s Experience With ALS

My mother had always been an active person. For as long as I could remember she would ride her bike, go for walks, do yoga and run occasionally. In the fall of 2015, she began noticing changes. She thought she was just out of shape, so she made working out a priority to try to improve her physical fitness.

After some time, she realized that if she walked too far she would struggle and eventually begin limping. Yoga became more difficult because her balance was off. She realized there was more to this than just being out of shape.

She scheduled an appointment with a doctor who then recommended a neurologist. She had two visits within a week’s time with the neurologist (this typically takes much longer). The neurologist diagnosed her with ALS but sent her to another doctor for a second opinion.

After lots of blood work, multiple MRIs, x-rays, etc., the medical team was positive it was ALS. My mother and brother tried convincing them it was something else, anything else. My brother had Guillain-Barré a few years prior, so they were hoping she had the same condition. Although Guillain-Barré and ALS have similarities, the nerves react very differently. Mom definitely had ALS.

After a couple of weeks she had another appointment. Doctors told her she did not have rapid progressing ALS, which we were so grateful for. That left her in either the slow progressive or moderate progressive forms of the disease.

Unfortunately, Mom lost her battle with ALS October 22, 2017, just 2 years after she first displayed symptoms. The disease stripped her of her ability to speak, hug her children, play cribbage with her parents and siblings, hold her grand babies and do anything for herself.

ALS itself never took away Mom’s mind or ability to think clearly, but the pain from ALS meant she needed medications like morphine. The morphine is what made me feel like I was losing my mom even more. Mom began hallucinating and got confused more often due to the drug. However, she always knew who her family and friends were, and I’m very thankful for this.

I’m grateful that Mom only spent the last week to two weeks of her life needing morphine. The rest of her time living with ALS she was as much of herself as she could be. Mom was always cognitive and with us even though her body was failing her. Although smiling was difficult for her, she always greeted me with the most amazing smile I have ever seen as she mumbled, “Hi beautiful.”

Mom was an amazing woman who blessed anyone she encountered with her presence. She spent 57 joy-filled years on this planet and taught her children what mattered most in life, family and giving to others. We hope wherever she is resting, there are endless miles of bike trails, a waterfall of coffee and Bob Marley playing 24/7. “Don’t worry about a thing, ’cause every little thing gonna be alright.”

Do you or someone you love have ALS? How has it been treated?

My mom ALS (amyotrophic lateral sclerosis) symptoms started out with a “foot drop” on her left foot. From there her left leg lost all muscle tone and all the entire left leg muscles was almost gone. Also her fingers and thumbs “contract” at times. Left arm is losing muscle tone too,she have been suffering from amyotrophic laterals sclerosis (ALS) disease for the last seven years and had constant pain which really get us worried, especially in her knees, the only treatment for this ALS (amyotrophic lateral sclerosis) is natural organic treatments honestly

So sorry to hear about your mum Kimberly! Thanks for sharing your story and godspeed!

Thank you for the kind words and sorry for the delayed response. 🙂