Home » What Are Blood Diamonds? How to Buy an Ethical Diamond

What Are Blood Diamonds? How to Buy an Ethical Diamond

To sustain this free service, we receive affiliate commissions via some of our links. This doesn???t affect rankings. Our review process. 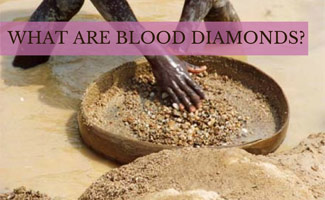 Are all diamonds a girl’s best friend? Not by any means, and you should know why. You probably know that not all diamonds are created equal regarding cut, clarity and other features. But do you know that some diamonds come with an ethical target on their back? We’re talking about blood diamonds. These diamonds originate from sources you don’t want to support. But what is a blood diamond? Keep reading for the information you need to know.

What are Blood Diamonds?

The United Nations (UN) defines blood diamonds as, “diamonds that originate from areas controlled by forces or factions opposed to legitimate and internationally recognized governments, and are used to fund military action in opposition to those governments.”

What’s the History Behind Blood Diamonds?

The term “blood diamonds” comes from the fact that the diamonds were sold to pay for bloody wars that killed thousands, while also abusing adult and child workers in the mines. In the late 1990s, miners illegally sold diamonds to fund weapons used in conflicts and civil wars, particularly in western and central Africa. More specifically, warlords and rebels used profits from the trade of blood diamonds to purchase arms during brutal conflicts in Sierra Leone, Angola, and the Democratic Republic of Congo (DRC). These wars resulted in more than 3.7 million deaths. Back then, blood diamonds accounted for an estimated 4% of all diamonds on the international market. Many were educated on this subject in the frightening Leonardo DiCaprio film of the same name.

The following video chronicles the plight of those affected by blood diamonds.

Are Blood Diamonds Still on the Market?

The short (and unfortunate) answer is yes. Although the wars in Sierra Leone and Angola are over, blood diamonds remain in circulation. In the West African country Côte d’Ivoire, rebels involved in a brutal conflict continue to use blood diamond profits to arm their cause. Traders smuggle these diamonds out of the country, and they make it to the legal diamond market. Merchants continue to smuggle conflict diamonds out of Liberia and other countries, too.

Should I Be Concerned About Other Ethical Issues?

How Do I Buy a Conflict Free Diamond?

Some jewelry suppliers have implemented ethical diamond practices. Unfortunately, many have not. Further, there is little information at smaller retailers about these policies. This knowledge gap makes it difficult for consumers to identify which jewelers sell conflict-free engagement rings, ethical wedding rings and other non blood diamond jewelry. Below are some guidelines to help in your search.

Be sure to see our best online engagement ring reviews for more information about some of the companies listed above.

Is there a jeweler that offers ethical engagement rings that you recommend?

About The Author: Sally Jones

Sally holds a bachelor’s degree in English and a minor in anthropology from James Madison University. She went on to pursue a master’s in journalism at The University of North Carolina at Chapel Hill. An international traveler since she was under 10 years old, Sally loves exploring the world’s mysteries first-hand. Her favorite destinations? Greece, the British Virgin Islands and NYC.

She also spent much of her career in health sciences communications and has enjoyed working with and learning from some of the world’s leading academic scientists in genetics, global health, addiction research and other fields.

Whiteflash Reviews: Falling In Love Doesn’t Have To Be Expensive

A Complete Guide To Titanium Rings (Includes Pros And Cons)

Lab Created Diamonds Vs Real Diamonds: Do You Get The Same Wow Factor?