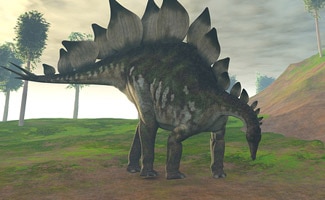 The Stegosaurus is perhaps one of the most widely recognized dinosaurs due to its armored plates that ran along its back in two columns. The Stegosaurus lived 150 to 145 million years ago during the late Jurassic period. While the large armored plates of the Stegosaurus make it more recognizable to amateur dinosaur lovers they also make it much easier for paleontologists to identify other Stegosaurids as well. The Stegosaurus, unlike some other varieties of dinosaurs, did not live through the small mass extinction which occurred at the end of the Jurassic period and as a result, never lived to see low level grasses or the humongous Tyrannosaurus Rex. The Stegosaurus did, however, live to thrive and spread their kind so far across the globe that their fossils have been found on four continents so far! We bring you all the facts, and many theories, that we could dig up on this magnificent dinosaur.

Stegosaurus Facts: The Roof Lizard, As Large as a Bus!

The Stegosaurus’ name translates to mean “roof-lizard.” This term came to be when the initial discovery of the Stegosaurus led Othniel Charles Marsh to believe that the plates along the Stegosaurus’ back lay flat rather than stood tall. The “roof-lizard” measured in at approximately 30 feet long and 14 feet tall (compare this to the size of a modern day bus) and weighed in at 5 short tons.

Unfortunately for the Stegosaurus, standing in at the size of a bus did not mean that it had a brain to correspond to its body size. The Stegosaurus’ brain is hypothesized to have weighed a mere 2.8oz making it one of the smallest among dinosaurs. This estimation was made fairly accurately after the discovery of a relatively well preserved Stegosaurus brain case enabled Othniel Charles Marsh to take a cast of the approximate size of the brain. Looking at the slender skull of the Stegosaurus alone makes it fairly obvious that the herbivorous quadruped lacked gray matter!

The Stegosaurid Dinosaurs and Their Armored Plates

The Stegosaurus dermal plates have prompted much debate as far as their arrangement. Due to the fact that these plates were never actually attached to the skeleton there is no real way to suggest how they were actually located across the dinosaurs back. In the past four separate theories pertaining to the location of the dermal plates have been suggested and some have been rejected while others have not. Othniel Charles Marsh originally believed that the plates lay flat, much like roof shingles, across the Stegosaurus’ back to act like a suit of armor; however, more complete specimens showed that the plates stood on their edge rather than lay flat on the Stegosaurus’ back.

In later years Marsh suggested that perhaps the dermal plates were arranged in a single row along the back of the dinosaur; however, this theory was soon dropped when the plates wouldn’t fit correctly. Further in to the future came the suggestion that the dermal plates ran in two rows along the Stegosaurus’ back with equally sized plates across from each other. This theory has not been rejected and is the most commonly held perception of the Stegosaurus, however, to date no Stegosaurus specimen has been found with two equally sized plates. The last theory in regards to the dermal plate organization of the Stegosaurus holds that the plates ran in two rows but alternated so that plates did not stand opposite each other but more so diagonally instead. While this is the most prominent belief among the scientific community it has also sparked some debate due to the fact that no such oddity can be located anywhere else in the reptile world.

The hard and bony dermal plates of the Stegosaurus did not require muscular effort to stand tall due to their structure; however, the function of these tall plates has been debated through the years. The dermal plates of the Stegosaurus have always been seen as a means of protection, body armor, for this four legged herbivore; however, due to the fact that the plates were never attached to the skeleton this theory is unlikely. It is also unlikely that the plates served as armor for the simple fact that they only protected the spine of the animal and not the vital organs which could easily be damaged from the sides.

More recent debate has suggested that the dermal plates served a thermo-regulatory purpose, my like that of the cranial crest of the Parasaurolophus. The dermal plates of the Stegosaurus contained blood vessels and the thinner plates would have constantly had air circulating around them, thereby cooling the Stegosaurus’ blood and controlling the body temperature. While this theory is popular among many dinosaurs with unique and misunderstood features it has been questioned by many experts who suggest that maintaining body temperature was not a significant enough need as to create a specialized structure for it. Other paleontologists suggest that perhaps the dermal plates served only to increase the height of the Stegosaurus and scare off predators or simply attract a mate. It has been suggested that the Stegosaurus was able to pump blood in to the plates allowing them to change color and perhaps deter predators. Lastly, and commonly among all dinosaurs with unique features, it is believed that the dermal plates served a purpose in identification.

Does the Stegosaurus Have Two Brains?

Another aspect of the Stegosaurus which has gained attention from paleontologists is the speculation that the Stegosaurus along with a few other species of dinosaur carried a second brain. Due to the discovery of a large canal in the hip region of the spinal cord it was believed for a time that the Stegosaurus had a second and much larger brain which was in charge of the back portion of the body. This unlikely theory has been thrown aside by most paleontologists, however, and the more recent theory is one which focuses on the existence of a glycogen body. In current day birds the glycogen body exists and is thought to provide glycogen to the bird’s nervous system – glycogen is used for long term energy storage in the body. It is postulated that the glycogen body in Stegosaurus provided additional supplies of glycogen to assist the Stegosaurus in facing predators; however, this theory is yet unproven.

While the Stegosaurus may not have been particularly intelligent dinosaurs they did mimic herding behavior of some of today’s most intelligent creatures. The Stegosaurus most likely traveled in small herds which were comprised of both young and old individuals. Matthew Mossbrucker of the Morrison Natural History Museum in Colorado believes this to be true after he discovered a set of Stegosaurus tracks indicating four or five infant Stegosaurus traveling in the same direction. Another set of tracks suggest that a young Stegosaurus was traveling in front of a much larger adult as their tracks overlaid.

The Stegosaurus Was Everywhere

One impressive factor in regard to the Stegosaurus is its widespread geographic location which suggests that the Stegosaurus thrived and had plenty of plant life to keep them fed well.

What and How did Stegosaurus Eat?

How Fast was Stegosaurus?

The Stegosaurus certainly did become a widespread throughout the late Jurassic period which is rather an amazing feat judging from their estimated locomotive speed. Due to the very short forelimbs and the longer back limbs the Stegosaurus had a clumsy build. With thick legs and an unusual arching back the Stegosaurus is estimated to have only been able to move at a maximum pace of 4 – 5 miles per hour!

Where Are Stegosaurus Fossils Found?

Despite this fact fossils of the Stegosaurus have been located in western North America – in Utah, Wyoming and Colorado, in Western Europe, in southern India, in China and in southern Africa! The first of the Stegosaurus fossils discovered was found in 1876 in Colorado by M.P. Felch and was named by Othniel C. Marsh in 1877. In 1992 the most complete Stegosaurus fossil ever found was also discovered in Colorado but this time by Bryan Small, Tim Seeber and Kenneth Carpenter.

The Stegosaurus: A Dinosaur Unlike Any Other

The Stegosaurus is one dinosaur that was so widespread that quite a few specimens have been discovered and enabled further discovery and investigation of this large herbivore. While each Stegosaurus specimen is certainly different from the others the general physiological similarities enable paleontologists to form a big picture of what this large quadruped was really like. From the smallest thing, such as a tooth, paleontologists are able to tell such important facts as diet and jaw physiology and from unique features, such as the dermal plates, paleontologists are able to tell such unique facts such as the asymmetry of plates among individuals within a dinosaur family. Much as with people today the Stegosaurus’ were all physiologically distinct from each other. Discovering the similarities as well as the differences between individual specimens within a family is a useful way to determine what the standards for a particular dinosaur family are as well as what unique features changed within individuals of that family. By comparing similarities and differences between individuals in a family it is perhaps possible to identify the purpose of such unique physiological features as the dermal plates of the Stegosaurus.

where were they found

what did the Stegosaurus evolve into?

Our research comes up empty on this subject but if any other reader knows anything on this topic, please reply. We’d love to have some insights or theories.