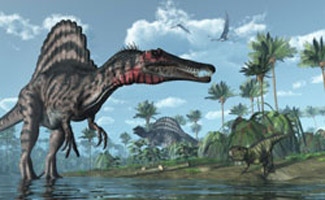 The Spinosaurus roamed the Earth during the late Cretaceous period, some 98 to 95 million years ago. The name Spinosaurus translates to “spiny lizard” and refers to the large spined sail that ran down these large dinosaurs back. The Spinosaurus was most certainly a bipedal dinosaur which walked similarly to the Tyrannosaurus Rex due to its smaller arms and larger, more muscular legs. It is thought by some paleontologists that the Spinosaurus would occasionally walk on all fours similar to other dinosaurs who switched from bipedal to quadrupedal locomotion since the Spinosaurus did have longer forearms than many other Theropods. This fact remains in question but for the most part it is believed that the Spinosaurus was a bipedal carnivore.

The Spinosaurus is thought to have measured around 46 feet long and weighed about 7.4 short tons. The most impressive section of the Spinosaurus’ length is perhaps the elongated skull with crocodilian type jaws which measured in at approximately 5 feet long.

The Spinosaurus spiny sail along its back is perhaps the most recognized feature of this large Cretaceous carnivore. The Spinosaurus’ sail is a particularly unusual addition to the dinosaur family; however, it was not unlike the sail of Dimetrodon, an 11 foot long Synapsid living 280 to 265 million years ago. Unlike creatures such as the Stegosaurus whose plates raised out of the skin the sail of the Spinosaurus was anchored by extensions of the vertebrae along the back of the dinosaur completely anchoring them to the skeleton. These extensions of the back vertebrae could grow as long as 5.5 feet and the sail like structure that connected the vertebrae are thought to have been thin and skin like. Towards the trips of the sail it was thought to be similar to the webbing between amphibious toes. There is some argument as to the actual composition of the sail itself. While it is understood that the spines within the sail were anchored to the vertebrae it is unknown as to what the sail was made from.

While some paleontologists believe that the sail of Spinosaurus was more like that of Dimetrodon, there are also those like Jack Boman Bailey who believed that due to the thickness of the spines within the sail, the sail itself may have been much more than a thin skin like membrane. Bailey suggests that perhaps the sail of the Spinosaurus was a particularly fatty structure skin to those of common day buffalo. The actual composition of the Spinosaurus sail is unknown at this time due to the complete lack of specimens to provide trace tissue samples.

The Spinosaurus sail is much like various features of other dinosaur genuses in that its actual function is unknown but widely speculated. Some paleontologists believe that the Spinosaurus sail played a part in thermoregulation. Thermoregulation is a common idea that is used to explain many unique structures on a variety of dinosaurs including Spinosaurus, Stegosaurus and Parasaurolophus. It is believed by these paleontologists that the sail was riddled with blood vessels which were so close to the skin that they enabled rapid absorption of heat to enable the dinosaur to stay warm during colder night temperatures. Other paleontologists suggest that the Spinosaurus spine was used to circulate blood through the blood vessels close to the skin to enable rapid cooling in warmer climates. Thermoregulation seems like a plausible explanation for the Spinosaurus sail, however, there are some other proposed explanations which also bring up interesting points.

While the purpose of the Spinosaurus sail may be questioned the purpose of its large, elongated skull is certainly not brought in to question. The Spinosaurus is recognized by paleontologists for having a particularly long skull which features crocodilian type jaws which provided the majority of the length of the skull itself. The Spinosaurus skull size makes it the longest skull of any carnivorous dinosaur known to date measuring in at around 5 feet long. The large jaws which make up so much of this length contained un-serrated teeth that were conical in structure and seem particularly well suited to catching and eating fish. It is believed that the Spinosaurus had around forty teeth in both the upper and lower jaw and featured two very large teeth on each side of the jaw. The Spinosaurus jaw isn’t the only feature of this carnivore which makes it similar to the crocodile, the Spinosaurus is believed by some paleontologists to have had eyes that were elevated at the back of the skull similar to modern day crocodiles. This feature lends to the theory of some paleontologists that the Spinosaurus was at least a part time aquatic dinosaur.

Switching Between Terrestrial and Aquatic life

The Lack of Spinosaurus Specimens

Much of what is known about the Spinosaurus is unfortunately known from speculation due to the absence of complete specimens. The first remains of the Spinosaurus were located in the Bahariya Valley in Egypt in 1912 although they were not named as Spinosaurus until three years later by the German paleontologist Ernst Stromer. Further Spinosaurus bones were located in Bahariya and identified as a second species in 1934. Unfortunately due to the timing of the find some of these bones were damaged in shipment back to Munich and the rest were destroyed during Allied bombing in 1944. To date six partial Spinosaurus specimens have been located and no complete or near complete specimens have been located. While the 1915 Spinosaurus specimen was destroyed during World War II paleontologists of the time still had detailed descriptions and illustrations of the find allowing for estimations of the size of a sub adult Spinosaurus.

Another Spinosaurus specimen found in 1996 in Morocco consisted of mid-cervical vertebra, an anterior dorsal neural arch and an anterior and mid-dentary. Additionally two more specimens located in 1998 in Algeria and in 2002 in Tunisia both consisted of dentaries. Another specimen located in Morocco in 2005 consisted of significantly more skull material and the huge skull is estimated by Sasso of the Civic Natural History Museum in Milan to be around 6 feet long making this Spinosaurus specimen one of the largest to date.
Unfortunately both for the Spinosaurus and for paleontologists no complete specimens of Spinosaurus have been found, in fact no specimens have been found that are even remotely close to being complete.

So while it is possible to infer that the Spinosaurus most probably walked bipedally like other large carnivores like the Tyrannosaurus Rex, it can never be known for certain, at least not until the discovery of a large and nearly complete Spinosaurus specimen.

Well, spino was not a geographic contemporary of t-rex ? Also his teeth were a factor in not being in competition with t-rex. spino’s round teeth were not suited to fighting/hunting/eating t-rex etc. There was so little blood in the spino/t-rex fight. You gotta look close to see it twice I love dinosaurs and Jurassic park. Can’t help myself!

Desert too difficult, what a bunch of wusses. Perhaps if all schooling was done in the field, then this would be less of a problem. Stupid academic morons.

I have found bones that have an uncanny resemblance to a Spinosaurus. There are vertebrae with the sail bone, a large bone that appears to be a limb. However, they were found in Florida. Where would I take them to
have them looked at?

I know this was posted a year ago, but at a university with respected paleontologists is where you should bring the bones.

Spinosaurus is estimated to have grown to 60 ft (18 meters) in length.

That’s just a estimation. But currently the biggest one to date was 50 feet long. 20 feet tall.

Despite what the silly movie Jurassic Park 3 states in the bloodless, damage-less fight sequence, it is estimated that T-Rex had the most powerful bite of all Dinosaurs. Spino was an impressive dinosaur,
however this manufactured competition between T-Rex & Spino is silly. It’s obvious that Spino was mostly a fish eater/ scavenger.

“Biggest skull ever”- Heard of Carcharodontosaurus or Giganotosaurus, both of them have skulls bigger than Spinosaurus. Giganotosaurus has the biggest measuring over 6ft.

interesting, were they carnivores, guest?

It was actually stated that the Spinosaurus has the longest skull of any carnivorous dinosaur known to date; however, you are correct in your statement that Carcharodontosaurus or Giganotosaurus
both had extremely long skulls as well. The confusion in skull size arises in the fact that skull size varied from individual to individual and to date very few complete skulls have been recovered of any of these dinosaurs.

So when all is said and done you are correct in saying that Giganotosaurus had the largest skull! Thank you for leaving a comment and sharing this information!