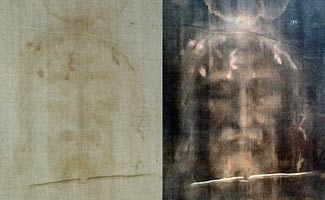 What is the Shroud of Turin?

The Shroud of Turin consists of a linen cloth made from flax that is 14 feet long and 3 1/2 feet wide. It has a faint image of a bearded, crucified man with bloodstains that match the crucifixion wounds Jesus of Nazareth experienced.

Where is the Shroud of Turin?

The Shroud was located in France for 200 years beginning in 1356. It is now located in Turin, Italy and has been there since 1578. It has been preserved and admired as the burial shroud that wrapped Jesus. All of this has been recorded in the Bible. From 1450-1983 the royal Savoy family owned the Shroud of Turin. The former King of Italy, Humberto II died in March of 1983 and, in his will, left the sacred linen to the Catholic Church.

What are Some Shroud of Turin Facts?

Is the Shroud of Turin Fake?

Below is some evidence that suggests that the Shroud is a fake.

Check out this man’s theory as to why the Shroud is a fake. It’s actually pretty interesting and rather simple how he explains it. (The video is pretty short too, just over 2 minutes.)

Do you think the Shroud of Turin is real or fake? Why?