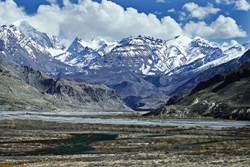 Both the history and mystery of the Dropa stones dates back to 1938. Plenty of controversy and unexplained theories surround the stones. Found amidst the remains of a strange race, the stones continue to remain an unexplainable archaeological find. Because the stones belong to the Chinese, study of the stones has been rather limited.

It is eminently possible that the stones may simply be associated with the ancient beliefs of a tribe of small, dwarfish people. The race itself is as much a mystery as the stones.

Because most people enjoy a good mystery, stories related to the discovery of these rather puzzling stones are being circulated over the World Wide Web. One often repeated story is about how the Beijing University’s archaeological team undertook an expedition to the foothills of the Himalayas. The expedition was headed by the Chinese Professor Chi Pu Tei, and the destination was Bayan-Kara-Ula, a remote area.

China and the Dropa stones

Upon reaching the remote area of Bayan-Kara-Ula, Professor Tei discovered a set of caves that had been tunneled into the mountains. What attracted his attention was the fact that the caves looked like they had been bored into by highly advanced technological tools. Once they entered the caves, a surprise awaited the expedition. There were several small graves, each one containing a small skeleton. Despite the smallness of stature, the remains were clearly not those of children. The skeletons were barely over four feet in height with heads that were overly large for otherwise slender or spindly frames.

The markers near the graves were circular stones roughly a foot in diameter with a hole drilled through the center and etched with spiral grooves reaching outward. The stone disks were about one foot in diameter and one-third of an inch in thickness. The disks had engravings that are of unknown origin and still part of the mystery. The cave walls had been decorated with crude depictions of the rising sun, moon, unidentifiable stars and even the earth that were found to date back to 12,000 BC. All of these pictures were joined together with lines of minute pea-size dots.

Professor Tei published his findings after his return to China. He stated that the skeletons may have belonged to gorillas, inhabitants of the Himalayan Mountains. About the disks, he claimed they must have been added by a later culture. Needless to say, he was greatly ridiculed in the archaeological community in China.

The Professor’s findings remained hidden until the university finally undertook further research into what came to be known as the Dropa stones. The research was spearheaded by Doctor Tsum Um Nui. Once it was understood that the stones had microscopic hieroglyphics etched on them, Tsum Um Nui removed a total of 716 stones from the graves in the mountain caves for further study.

Did the Silent Dropa Stones Give Up Their Secrets?

If Dr. Tsum Um Nui’s findings are to be believed, the hieroglyphics on the stones were for the most part unreadable. However, the doctor was able to piece together a story that was astounding. According to him, the stones revealed a story of an alien race called the Dropa. The crash landing made on earth killed a good number of the crew. The survivors hid in caves to protect themselves from the local tribe called the Ham. Eventually, the two tribes managed to coexist, but the Dropa could not repair the spaceship. This meant the Dropa had to live out their remaining years in a strange and hostile land.

What the professor did was to painstakingly transcribe the characters or hieroglyphics from the disks to paper. Trying to make sense of what was probably 12,000 years old was no easy task and one that was a real struggle. Once the characters had been transcribed, it was time to decode the messages. Slowly, the message began to take shape first as words and then as phrases that became understandable.

Dr. Tsum Um Nui put together his research work in the form of an academic paper, but Beijing Academy forbade publication of the paper. Though it was eventually published, it was the subject of great ridicule. The result was that Dr. Tsum Um Nui resigned his post and went to Japan where he lived in obscurity.

Russia and the Dropa Stones

In time, the Russians also became interested in the Dropa stones, and they asked for and received permission to undertake additional research on the stones. Some of the stone disks were dispatched to Moscow to be examined. The outcome of this research indicated that the stones contained a high concentration of cobalt together with other substances that were metallic in nature. What is even more surprising is the knowledge that the stones oscillated as if they contained an electrical charge. Scientists found that putting the stones on a turntable elicited a special hum from the stones, like an electrical current was passing through the stone. At least one scientist believes that in some way the stones are associated with an electric circuit that dates back to ancient times.

Austria and the Dropa Stones

Ernst Wegerer was an engineer from Austria who managed to photograph two disks in 1974 while on a tour of the Chinese Banpo Museum in Xian. His claims about the disks include seeing the holes in the center of the disks and the hieroglyphs in grooves that displayed a spiral pattern, but they were crumbling.

When Wegerer approached the management of the museum for further information, there was none forthcoming. According to the manager, there was nothing to tell about the stones that she said were probably cult objects of no importance. On the contrary, she was knowledgeable about every other clay artifact in the museum.

If Wegerer’s account is to be believed, the museum manager actually allowed him to handle one of the disks. He did relate that the disk weighed approximately two pounds and was one foot in diameter; however, the pictures he took do not show the fine details of the spiral grooves and hieroglyphics.

Apparently, two days after Wegerer’s visited the museum, the manager was called away. Soon the manager and the two disks vanished forever. This scenario was reported by Professor Wang Zhijun, a director of the museum in 1994.

Corroboration of the Dropa Stones

Several archaeologists and anthropologists have made an effort to study the isolated Bayan-Kara-Ula area to find out how much corroboration there was of the information about the stone disks.

There are always advocates for and critics against any theory, and the critics are quite vocal in rejecting claims made about the Dropa stones. The main argument centers round the fact that the stones are a hoax. One of the Fellows of the Royal Anthropological Society and a member of the Royal Geographical Society, Gordon Chreighton, became quite interested in the Dropa stones. After studying and investigating the sequence of events to the point of contacting several Chinese academics, Chreighton decided that it was all totally groundless. His findings have been detailed in an article he wrote for the Flying Saucer Review.

It has been hard to find tangible, traceable evidence that lends credence to the story of the Dropa stones. The question remains if it is the figment of one man’s imagination. But there was more than one person involved in the story, beginning with the first expedition undertaken by Professor Chi Pu Tei and his team of students.

So much about the Dropa stones hinges on what is right or wrong. If Dr.Tsum Um Nui was wrong in his translations of the microscopic text on the stones, then the theory that these strange people are descended from aliens falls flat.

Ironically, there are tribes in the area called the Ham and the Dropa. Their existence today is in some doubt, but it is believed that these semi-troglodyte tribes still live in the cave area at the foot of the Himalayas. Their location is in itself another mystery, but what has been gathered is that the people are roughly four feet tall. Another thing that seems to lend some credibility to the alien story is that these tribes have large heads in proportion to their bodies and weigh approximately 40 to 50 pounds. These people are believed to be frail and stunted in growth; they are either Tibetan or Chinese. This leads to questions if they are the ancestors of the bodies found in the cave graves or if they descended from aliens. It is inconclusive if the Dropa stone disks were indeed translated correctly.

There is yet another mystery that surrounds the stones, and this one relates to the age of the Dropa stones. According to the pictures in the cave and thanks to carbon dating processes, it has been decided that the paintings are about 10,000 to 12,000 years old. Working on the assumption that the disks belong to the same period, it would mean they are approximately 11,000 years old. There remains the question if the disks are as old as the cave paintings.

There are several interesting arguments refuting the legends of the Dropa stones. When considered logically, they would appear to successfully refute the story of the stones.

There is no concrete evidence to date to verify that Tsum Um Nui existed, lived in China, studied and deciphered the Dropa stones, published a paper on his research that was widely ridiculed in China and then fled to Japan to die in obscurity. It has simply not been possible to find any trace of this elusive doctor, or so it would appear. One cannot blame all voids on the Cultural Revolution or the Communist cover-up theory.

One has to wonder then about the Austrian engineer’s tale of actually seeing and handling two of the disks, only to have them disappear two days later along with the museum manager. This emulates a science fiction movie plot.

According to Gordon Chrieghton, the word Dropa describes the nomadic people of the Tibetan highlands. The word itself translates to “solitude” or “isolated.” Then we have Chrieghton’s description of the Dropa, and it is nowhere near the semi-troglodyte description of stunted people with big heads. According to him, the Dropa were large as befitted their status as herders.

The Ham is also a tribe in Tibet and is nowhere near the feeble dwarf tribe described earlier. Many of the Ham tribe was used as bodyguards by the thirteenth Dalai Lama when he escaped Chinese invasion.

There are more questions than answers regarding the Dropa stones. However, anything is possible including a full revelation of this mystery at some future date.

This tale is bunk. The names of the Chinese professors bear no similarity to any Chinese scholar living or dead, and do not correspond to Mandarin phonology or transliteration, which would certainly have been used by any educated person living in northern China.