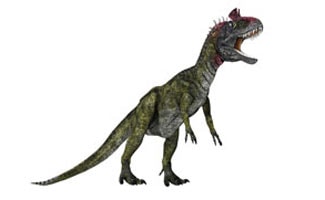 Cryolophosaurus roamed the planet during the early Jurassic period and while it is certainly not a commonly known dinosaur it was unique in a variety of ways. Along with its unique physical appearance the Cryolophosaurus also lived in a unique area of the world that many other species of dinosaur tended to avoid. Jokingly referred to as the “Elvisaurus” the Cryolophosaurus was a large carnivorous dinosaur that is of great significance to the paleontological world not just for its unique status as a meat eater that roamed where most others would not go but also because it is the oldest known Tetanuran that has ever been discovered in the history of paleontological discovery.

The Cryolophosaurus Was The First Discovered Carnivorous Dinosaur Of The Antarctic

Cryolophosaurus walked the planet some 188 million years ago and this giant bipedal carnivore may not have measured up to the later carnivorous giants to come but this beast did not have all that much competition in its chosen territory. Unlike many other large carnivorous bipeds the Cryolophosaurus made its home in Antarctica and was the first carnivorous dinosaur to ever be discovered on the continent. Not only was it the first carnivorous dinosaur to be found in Antarctica but it was also the first dinosaur from the continent of Antarctica to be officially named! Cryolophosaurus was categorized as a Tetanuran dinosaur, a class of dinosaurs which describes nearly all of the Theropods because it classifies those with stiff tails. While most Tetanurans were believed to have begun evolving during the middle of the Jurassic period the discovery of Cryolophosaurus allowed paleontologists to widen that estimate to include the beginning of the Jurassic period as well. The Tetanurans were specifically the large stiff tailed Theropods that show more semblance to the birds of modern day society than they did to the Ceratosaurus, large carnivorous dinosaurs with small horns on skull features.

How Large Did Cryolophosaurus Grow?

Cryolophosaurus may have been the first of the known Tetanurans but it most certainly was not the largest; however, with little carnivorous competition in the cooler climate of the Antarctic continent it would not have been necessary for Cryolophosaurus to grow to extreme sizes. Remaining at a “reasonable” size would also have allowed the Cryolophosaurus to thrive in the cool atmosphere by reducing the amount of food that it would require to fuel its large body in the cooler environment. In comparison to the much larger Tetanurans such as Megalosaurus and Allosaurus the Cryolophosaurus may have appeared smaller but in the cool Antarctic this large predator would have been close to the top of the heap when it came to the food chain. The Cryolophosaurus measured around 20 feet long and approximately 5 feet tall and it also weighed in at around 1,160 pounds. This large carnivore was much more formidable than many of the other species walking the Antarctic continent in the early Jurassic period.

Cryolophosaurus is recognized by many dinosaur lovers for its rather unique cranial crest. Rather than resembling the horn like crests of the large herbivores like Parasaurolophus, the cranial crest of the Cryolophosaurus looked much more like a sideways chicken comb attached to the skull between the dinosaur’s eyes. Some people refer to this cranial crest as looking much like the pompadour haircut that Elvis wore in the 1950’s and as a result this formidable carnivore of the cooler Antarctic continent is often jokingly referred to as “Elvisaurus.” For the prey of the Cryolophosaurus; however, this predator was no joke! The Cryolophosaurus fed on large plant eating dinosaurs such as Prosauropods. It is believed that the Cryolophosaurus had large sharp teeth which curved backwards to ensure that prey that was captured in the jaws was not able to escape. The Cryolophosaurus would have caught prey much like the other large Theropods like Tyrannosaurus, relying mostly on its jaws to do the killing as its forelimbs were particularly short and would have been unable to play a large part in killing prey. The shortened forearms could have potentially held prey but the killing aspect of hunting would have depended on the Cryolophosaurus’ large teeth.

The Cryolophosaurus poses something of a conundrum for paleontologists who want to classify this large Theropod because this primitive bipedal carnivore possesses traits of a variety of dinosaurs. The Cryolophosaurus particularly resembles the Theropods in its leg structure, while the skull represents the Tetanurae and other features of this dinosaur resemble those of the Ceratosaur. It was through much research; however, that paleontologists determined that the Cryolophosaurus was most likely the earliest of Teranuran dinosaurs because of its similarity to other Tenurae.

The Early Jurassic Climate Of Antarctica

While the unique Cryolophosaurus is believed by many to be a somewhat magical dinosaur in that it had the ability to live in frozen Antarctica, it should be recognized that during the early Jurassic period the Antarctic continent was nothing like the Antarctica that we know now. The continent was far closer to the equator and as a result it was considerably warmer than it is today and was marked with forests and vegetation. While the Antarctica of the early Jurassic period was considerably warm in comparison to the Antarctica of today it was also considered to be rather cool by dinosaur species and as a result it did not seem to team with life like much of the rest of the world did at this time. Fossilized evidence does point to the fact that there were diverse life forms on the Antarctic continent at this time though including Tritylodonts, Pterosaurs and Prosauropods. The temperate climate of Antarctica of the early Jurassic period seemed more hospitable to smaller more herbivorous life forms; however, somehow Cryolophosaurus was able to survive.

Cryolophosaurus Was Lighter And Faster Than T-Rex

Being considered as a Tetanura dinosaur the Cryolophosaurus small forelimbs featured three digits which would have proven handy in grasping prey or even grasping a mate during mating season, these three digits on the end of two rather short and stubby forelimbs would have been of little use in defensive fighting and were the Cryolophosaurus to defend itself it would have relied upon its incredibly powerful jaws. The Cryolophosaurus was a Saurischian dinosaur which meant that it had much larger fenestrae in the skull than the Ornithischians which allowed for much larger jaw muscles. The strong jaw muscles of the Cryolophosaurus would have attached to these large fenestrae in the skull that served not only as anchor points but also as a way to lighten the weight of the skull for this bipedal carnivore. As a Saurischian dinosaur the Cryolophosaurus had hips which were similar to the structure of lizard’s hips with a pubic bone that pointed down and forwards rather than backwards like the pubis of the Ornithischians.

Cryolophosaurus was first excavated by David Elliot, a geologist from Ohio who had agreed to split the funding of the archaeological dig with William R. Hammer. Elliot found his Cryolophosaurus specimen embedded in rock some 13,000 feet above sea level and 400 miles from the South Pole. Elliot told Hammer of his discovery and in the subsequent weeks Hammer excavated thousands of pounds of rock which contained various fossils including some Cryolophosaurus bones. The excavation of the Cryolophosaurus specimens certainly did not reveal all that there was to be known about these early Jurassic beasts because the specimens were far from complete. The specimens recovered from Hammer and Elliot’s Antarctic expedition consisted of minimal bones; however, among those bones were a skull which is one of the most important aspects of a dinosaur fossil in that it provides paleontologists with much more information about a dinosaur than most other sections of a specimen’s skeleton. The Cryolophosaurus discovery in the Hanson Formation consisted of a crushed skull, a mandible, 30 vertebrae, an ilium, an ischium, a pubis, a femur, a fibula, a tibiotarsus and metatarsals. While these bones may not form one complete Cryolophosaurus they certainly give paleontologists a lot to go on when reproducing how this Jurassic beast looked.

It is hard to imagine a time when a piece of land that has become as frigid as Antarctica was filled with lush forests and vegetation or even teaming with life. While the land seems barren today with the numerous species that call the frigid continent home it is important to remember that during the early Jurassic period life was much more abundant as a result of much more abundant pant growth and considerably higher temperatures. Certainly Antarctica would have been cooler to the dinosaurs that were used to living in the tropical climates of North America; however, it would still have been habitable and had much to offer in terms of food supply for both herbivores and carnivores. The species that have come to thrive on the Antarctica of today would never have been able to thrive on the Antarctica of the early Jurassic period which was some 100 miles further north and much closer to the equator.

Perhaps as a result of its unique choice of environment the Cryolophosaurus was able to survive in an environment that, while cooler than other locations around the globe, offered additional benefits to the more populated areas of the period. Living in the Antarctic provided the Cryolophosaurus not only with plentiful food to sustain itself but also with considerably less competition as well as less of a probability of becoming another large carnivore’s next meal. For the Cryolophosaurus enduring slightly cooler temperatures provided this Theropod with bountiful food, lower levels of competition and a fighting chance at surviving youth because of a lack of the much larger carnivores that stalked the more populated continents of the period. There may not be many Cryolophosaurus to date to attest to their successful choice of habitat; however, perhaps this scarcity of specimens has more to do with the thawing and freezing of the continent itself rather than the actual success of the species. No one can truly know; however, until further excavation sites are revealed with additional Cryolophosaurus specimens that can tell a little more about the lifestyle of this unique dweller of the early Jurassic Antarctic.

Thank you. This helped me with my Language Arts essay a lot. Thanks for providing so much facts and information. Hope its true, haha.