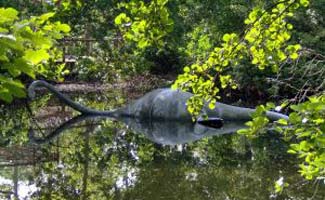 Over the past years the Brontosaurus has become no more. It is not the fact that the dinosaur disappeared, more that it never actually existed. The Brontosaurus as it was known to paleontologists was actually first discovered and classified as the Apatosaurus and due to rules of the International Code of Zoological Nomenclature the name which was documented first defaults. As a result approximately thirty years ago the Brontosaurus name began to fade out and the once grand and well recognized dinosaur received a name change. Despite the name change, however, this humongous beast of a dinosaur still holds a place in dinosaur lover’s hearts as a “favorite.”

Brontosaurus: One of the Largest Creatures to Ever Walk on Our Planet

How Did Brontosaurus Eat?

Due to the length of its neck this giant herbivore is thought to have held its neck parallel to the ground rather than up above its body. Paleontologists hold a couple of theories as to how the Apatosaurus (Brontosaurus) used its long neck to feed. As opposed to popular misconception the mammoth herbivore did not reach its neck up to tall trees and rather it is thought to have either used its long neck in mowing motions to feed on vegetation or they used their long necks to reach out in to marshy ground to feed on lush swampy vegetation. Both of these theories hold ground due to the fact that the Apatosaurus (Brontosaurus) was so large it could not efficiently move through forests to feed on masses of vegetation, nor could it stand in swampy ground without sinking and thereby meeting a slow death.

What did Brontosaurus Eat?

The dominant flora during the late Jurassic period was made up by many conifers and most likely made up a large portion of the Apatosaurus (Brontosaurus)’s diet. Also thriving during the Apatosaurus (Brontosaurus)’s time were Caytoniaceous seed ferns, Bennettitales, and Cheirolepidiaceae which grew on lower vegetation lines. Throughout forests ginkgos and Dicksoniaceous tree ferns thrived and may well have been picked by the Dicksoniaceous tree ferns as they passed edges of the densely wooded areas.

How Long Did Brontosaurus Live? 100 Years?

Such a long lifespan may seem astronomical in terms of such a large animal; however, life spans of large creatures are not necessarily short. It is often assumed that large animals die sooner due to the strain on their heart as a result of pumping blood through such a large body but this is simply not true. A dinosaur like the Apatosaurus (Brontosaurus) was incredibly large but it also had an incredibly large heart which pumped its blood around its body. Aside from this fact it is not particularly bizarre for large creatures to have long life spans, take for example the elephant or, to a larger extreme the Bowhead Whale. As a considerably large land mammal the elephant can live well in to its eighties.

As a particularly large sea faring mammal the Bowhead Whale has been known to live as long as two hundred years – although this is slightly less applicable to the Apatosaurus (Brontosaurus) due to the fact that sea faring mammals often live longer lives than land faring mammals.

How did Brontosaurus Move and Live?

When considering the physiological structure of such a large creature paleontologists must recreate these giant beasts to attempt to learn more about their movements and basic living functions. One of the most puzzling factors that paleontologists have yet to completely figure out in regards to the Apatosaurus (Brontosaurus) is the mechanics of breathing. Such a large creature could never have survived submerged in water and based on the sheer amount of air that this size of an animal could take in the recreation of the respiratory system becomes a particularly puzzling task. While recreations of the Apatosaurus (Brontosaurus) respiratory system have been less fruitful than physiologists have hoped, computer animations replicating the size and weight of the Apatosaurus (Brontosaurus)’s tail have been more bountiful. An article in Discover Magazine in November 1997 reviewed computer animations by Nathan Myhrvold and found that the Apatosaurus (Brontosaurus) was more than likely capable of using its tail like a bullwhip and creating a sound which measures in at over 200 decibels.

Where did Brontosaurus Live?

The Apatosaurus (Brontosaurus) is believed to have lived within Western North America, its fossils having been found in Colorado, Wyoming, Utah and Oklahoma. The Apatosaurus was first named in 1877 by a Yale University paleontology professor, Othniel Charles Marsh. The specimen he named as Apatosaurus was a juvenile and in 1879 when Marsh discovered a larger specimen he incorrectly labeled the second species as a Brontosaurus. As the biggest land animal ever seen, the fully grown Brontosaurus specimen was mounted in the Peabody Museum of Natural History in 1905 using bones from similar dinosaurs to fill in the missing pieces. As it turns out the head of the “Brontosaurus” display was actually the mock up of a head of a Camarasaurus. Since this display was labeled as the Brontosaurus the name stuck in the minds of public making it even more difficult to erase once it was discovered that the two specimens were the same dinosaur at two different points in time! Due to the fact that Marsh named the first of the two specimens Apatosaurus it was declared that the name should stand and the older term “Brontosaurus” should be used only as a synonym.

While there is little evidence of the life of the Apatosaurus (Brontosaurus) in comparison to other dinosaurs whose fossils are much more numerous, the large beast holds a specific fascination for paleontologists and animal lovers alike. What is it about this huge beast that draws us all to it? Aside from being seen as a gentle herbivore, the Apatosaurus (Brontosaurus) was such a truly giant creature that it seems too fantastical to be true. Without the proof of skeletal remains it would never be believed that such a giant creature could exist, let alone live the lifespan that some paleontologists assume – one hundred years!

Can anyone tell me why the apatosaurus became extinct?

I would like to know the classification on the Brontosaurus and I could not find it on here, so that would be helpful information for me right now.

Where have the Brontosaurus remains been found?

Thank you for your question. Apatosaurus or Brontosaurus remains have been found in Mexico and in North America since these giant beasts roamed throughout that territory when alive. One of the more complete specimens of Brontosaurus was found in Como Bluff, Wyoming in 1879 by Othniel Charles Marsh. Footprints from the juvenile Apatosaurus have also been found in Quarry Five in Morrison, Colorado. The Morrison formations are well known for many Apatosaurus remains and when it comes to the dinosaur species that frequented this area, Apatosaurus was the second most common sauropod!

The Brontosaurus has got to be my favorite dino. Being a vegetarian, I can relate to it better than say, the T-Rex. One thing that I don’t understand is the name change to Apatosaurus. I can barely spell that! We grew up as kids knowing this gentle herbivore by the name Brontosaurus, and I think it should stay that way. I don’t suppose you could add a poll to the site? Thanks and wonderful site! I can’t wait to learn and see more about my favorite time period on Earth (besides the one I’m in of course).