Home » Mysterious Seeds From China: What Is Their Purpose?

Mysterious Seeds From China: What Is Their Purpose?

To sustain this free service, we receive affiliate commissions via some of our links. This doesn’t affect rankings. Our review process. 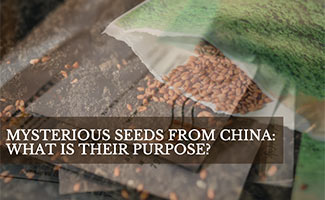 Residents across the globe are receiving mysterious packages of seeds (as in those you can plant) in the mail from China. It’s capturing the global headlines, and still, no one knows what their purpose is. Is it agricultural bioterrorism? Is it brushing (read: deceitful e-commerce technique to boost a seller’s ratings by creating fake orders)? Or is it aliens sending trojan horse DNA and making it look like it’s from China?

The expert researchers at Exploring Life’s Mysteries that brought you the truth behind 2012 and the Denver Airport conspiracy (featured on the Travel Channel), present what we know so far on the mysterious China seeds.

Who Is Receiving The Seeds?

CBS News has reports of residents in all 50 states receiving unsolicited seed packages from China. The U.S. Department of Agriculture, meanwhile, has reported that recipients in at least 22 U.S. states and several other countries have received packages.

How Many Seeds Are We Talking About?

Florida has reports of having received more than 600 shipments of seeds, and In New York, the State Department of Agriculture has received 500 shipments and counting. This means on a national scale the number of seed deliveries is probably in the thousands to tens of thousands, and on a global scale, possibly in the hundreds of thousands.

What Are We Doing About It?

In the U.S., in addition to the USDA and FDA, the FBI, DHS (Dept. of Homeland Security), and CBP (Customs and Border Protection) have all launched investigations. Canada, the U.K., and Australia are all conducting investigations as well.

The seeds vary in shape, size, and color, and arrive in clear plastic bags packaged within standard white or grey envelopes. The labels are misleading – they indicate that the packages contain  various items ranging from jewelry to plant species like bonsai (when in fact they contain the mysterious seeds).

What Types Of Seeds Are They?

The USDA has identified 14 species of seeds so far, and there doesn’t seem to be a pattern as far as “species” is concerned. Everything from mustard seed to cabbage and roses is being mailed.

What Is China Saying?

China’s Foreign Ministry has stated that the mailing labels are forged and they’ve asked the U.S. to return the packages to China for investigation.

Are The Seeds Really From China?

What Should I Do If I Received Seeds?

The official guidance from the USDA is not to plant (or even handle) the seeds. Instead, turn over the seeds in their original packaging to U.S. agriculture departments.

Contact your local USDA state plant health director or your local state plant regulatory official listed on the NPB (National Plant Board). Meanwhile, do not open, handle or plant the seeds, keep them stored away from children and pets and retain them in their original packaging.

Planting them could result in invasive species (think Kudzu) destroying our native ecosystems. Do not throw them in the trash either, as they might sprout in landfills.

When Did This Begin?

The mysterious seeds began arriving at the doorsteps of unsuspecting U.S. residents in early to mid-July of this year. In trying to pinpoint the exact date, our researchers came across this Amazon listing for Rare, Black With Red Dahlia Seeds by a “Generic” company with a stock image of a Black Dahlia with consumer feedback that was posted before the majority of larger news outlets reporting on the mysterious seeds.

While Amazon will not allow us to repost the comments of those who recently purchased these seeds, you can go check for yourself to see what their experience was.

Could It Be “Brushing” And What Is That?

Brushing is a deceitful e-commerce technique to flood a market with free products in exchange for exposure. The USDA maintains this as a possible explanation for the mysterious seeds as they wait for more evidence. The Amazon platform is frequently exposed to this tactic.

How Does Brushing Apply To The Mysterious Seeds?

The key variable is the shipping address – since they may not have contacts in the U.S., they find addresses and just start sending empty packages (or in this case, packages with seeds) to random addresses. Once the postal service marks the package as received, the seller logs in as the purchaser account they created and leaves a positive review for their product.

The flaw that jumps out at me with this scenario is the seeds. Why wouldn’t a seller make their lives easier and just send empty packages? While some empty packages have been reported, the fact that the majority of packages contain a specific item – in this case seeds (and a variety of seeds at that), makes me think this is not a brushing attempt.

You Think Seeds Are Mysterious?

Wait until you see what we have in store for you here!

Have a theory on what the purpose of the mystery seeds is? Let us know in the comments!

About The Author: Alex Schenker

Alex started Exploring Life's Mysteries with his wife Michelle, as they set out on a quest to discover the mysteries of life together. Alex loves to philosophize, wonder what our purpose is, and travel the world in search of new cultures, ideas, and lifestyles. He has been an international traveler since he was 6 months old and has lived in and visited over a dozen countries from Southeast Asia to South America.

We are a participant in the Amazon Services LLC Associates Program, an affiliate advertising program designed to provide a means for us to earn fees by linking to Amazon.com and affiliated sites.